Why I’m standing in Hoxton East.

If I’ve learned anything from the last few months of fighting road closures in Hackney, it’s that our elected representatives see residents as little more than naughty children that can’t be trusted to do as we’re told. They certainly don’t see us as rational citizens capable of making wise choices. And that’s the whole basis of democracy. In a democracy we have to be trusted to make choices about how we live our own lives. You can’t simply impose everything from above, thinking you know best, as the council invariably do. For one, it’s a waste of the talent, insight and experience that residents possess. 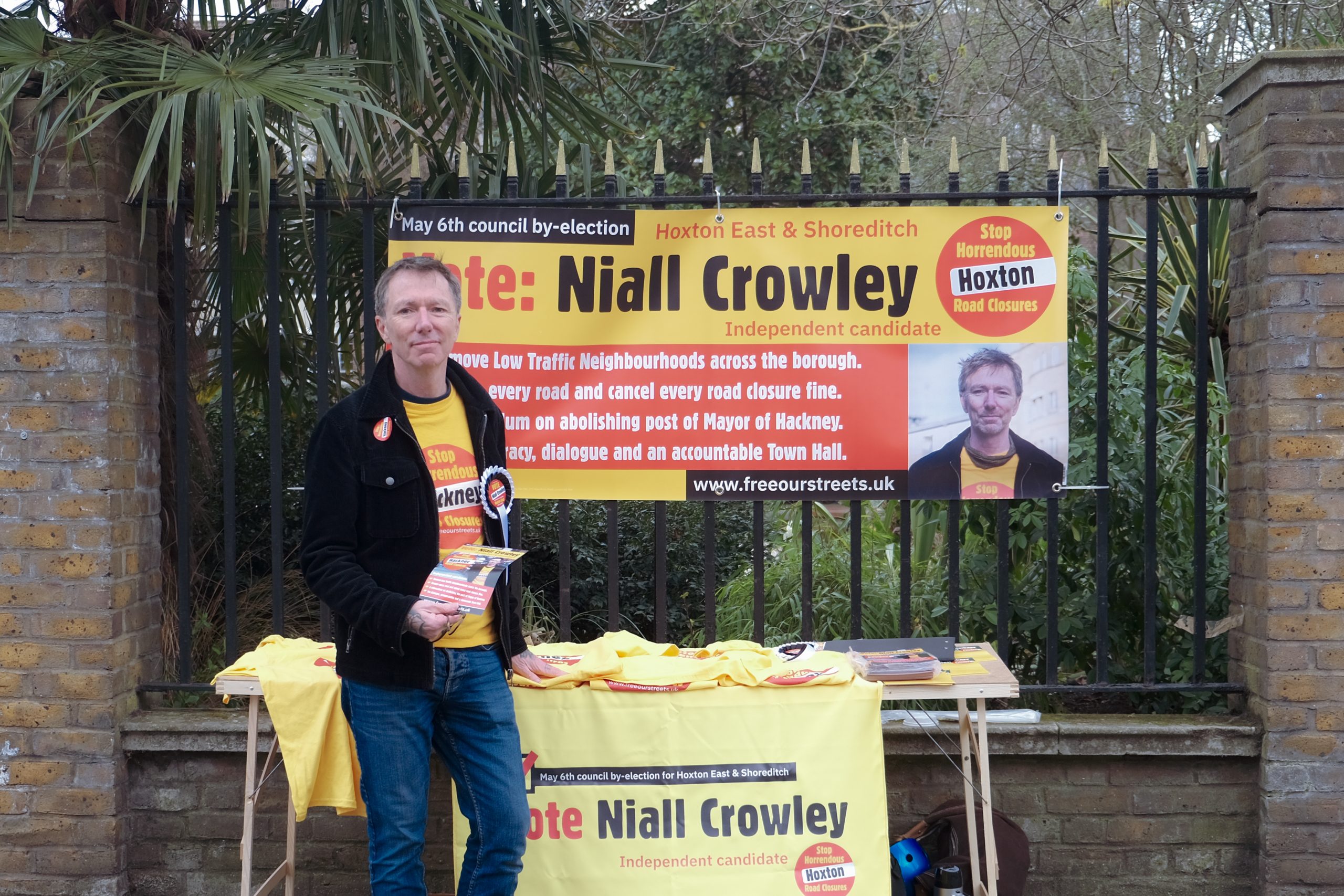 That doesn’t make good policy, as we have seen. Then you end up sowing mistrust and resentment; creating artificial divisions like cyclists versus motorists, healthy versus disabled, newer residents versus older, and on it goes. But the politics of Labour today thrives on divisiveness.

These road closures have been a disaster, right across Hackney. They have paralysed our neighbourhoods, left many elderly and disabled people stranded in their homes, greatly increased journey times, left many people struggling to get to work or a hospital appointments, and many local businesses on the brink of failure.

They have however, succeeded in uniting radicals, conservatives, Greens, muslims, jews,  young and old against them. That at least is one good thing that has come out of the mess made of our roads. And we need unity if we are going to restore some sort of normality to the borough.

I believe that standing for office and fighting the council at the ballot box is one very important way forward for residents and I hope that I am the first of many.

I first came to Hackney nearly 40 years ago, but I moved here in the early 2000s, when I opened The Eclipse pub off Chatsworth Road in Lower Clapton. It was an old East End boozer on the edge of what was commonly known as ‘Murder Mile’. As a business it was failing badly and was facing closure. We put everything we had into it, renovated it on a shoestring, and managed to turn it into a real hub of the local community. It was a very popular place and had a transformative effect on the area, but nevertheless it was really tough to make a living, as anyone in the pub business will tell you.

Oddly, one or two people branded us as middle class ‘gentrifiers’, which struck me as a bit odd given I grew up on a council estate and came from a long line of factory workers and cleaners. But what these self-styled critics didn’t seem to like was working class aspiration. We served nice coffee and wine, we even sold cocktails, and they couldn’t imagine working class people might be into anything other than boozing, fighting and swearing, so they branded us ‘gentrifiers’. And I guess that’s partly why I’ve often stood up for gentrification. Unfortunately it’s a very slippery term and so now I’m often accused of supporting ‘social cleansing’ and a whole bunch of other things. None of which are true.

My partner and I ran The Eclipse that for nearly four years, and really helped build a new kind of community spirit in the area, bringing older and newer residents together. We had a fantastic time and met some great people and made some lifelong friends. So I know plenty about running a business in Hackney and how difficult the council can make things for small businesses. Even back then the council were trying to close the roads in our neighbourhood. If they’d succeeded it would have prevented us from getting deliveries and meant we’d be unable to function. Luckily they listened to reason back then.

Care work and the older generation

Following on from that I became a part-time carer for my mom, who developed vascular dementia and was bedridden for almost 10 years. Like many people in that situation, having a car was an absolute necessity. While my main mode of transport these days is my bike, or the bus I know that many carers, business owners, mothers and support workers need their cars on a daily basis. I also have a fair bit of experience of dealing with the NHS and care services. We had some really awful experiences with the hospital where my mom lived.

I really think we need to prioritise and rethink how we care for our elderly. I would like to see families and the wider community begin to play a central role in creating a much more humane care system than what we have now. Things are way too bureaucratic at the moment, with procedure and box-ticking prioritised over the needs of families.

I’m concerned about reports that St Leonard’s dementia wards may close and be moved out of the borough. I will absolutely do my best to fight that if I’m elected. I’d also work for the whole site to be improved and upgraded, and look at ways in which the wider community can become involved in helping to really improve the life and wellbeing of patients.

Horrendous Hackney Road Closures (HHRC) was formed last summer by a group of young mothers and carers, in response to the council’s imposition of Low Traffic Neighbourhoods (LTNs) and road barriers. I became involved about a week into the campaign, as I’d written about what had been happening there over the summer.

I’ve been central in organising a series of (peaceful) events and demonstrations, and am leading a campaign for a referendum on abolishing the Mayoral system. It’s a true grass-roots, organisation, run by and for residents. We are arguably now the major opposition in Hackney, so running for election makes perfect sense.

I would admit I have much to learn about local government, but I’m certain I can make a difference. It’s time to start trusting the electorate and have some reasoned and grown-up conversations about the problems we face and how we can begin to tackle them.

One or two ‘seasoned’ career politicians tried to dissuade me with comments like ‘This is how politics has always been done in Hackney, you won’t change anything’. But I’m really not in this for cynical old style politicking. There will be no shady backroom deals or impenetrably dull procedural politics. Hackney has had more than enough of that over the years.

It’s become clear, during the campaign, if it wasn’t already, that Hackney council is not interested in representing ordinary residents. It’s clear also that we can no longer ignore the goings on in the Town Hall. This administration is not just out of touch, it’s out of control and only residents can bring some reason and reality back into political life. So we need to take an interest, and begin to play more of an active role. If I am elected then we have got a foot in the door, we can see a chink of light! With full council elections in 2022 we can really begin to change things and create proper voice for residents. We can renew our democracy and do really great things.