A festive ‘motorcade’ will be winding its way through the congested streets of Hackney in East London on Saturday 12th December, with a very special delivery for Town Hall bosses. Hundreds of East London residents, opposed to Hackney council’s drastic road closures and Low Traffic Neighbourhoods (LTNs), are taking to the road to deliver a consignment of cabbages in response to inflammatory remarks made by Hackney Council transport boss Jon Burke. 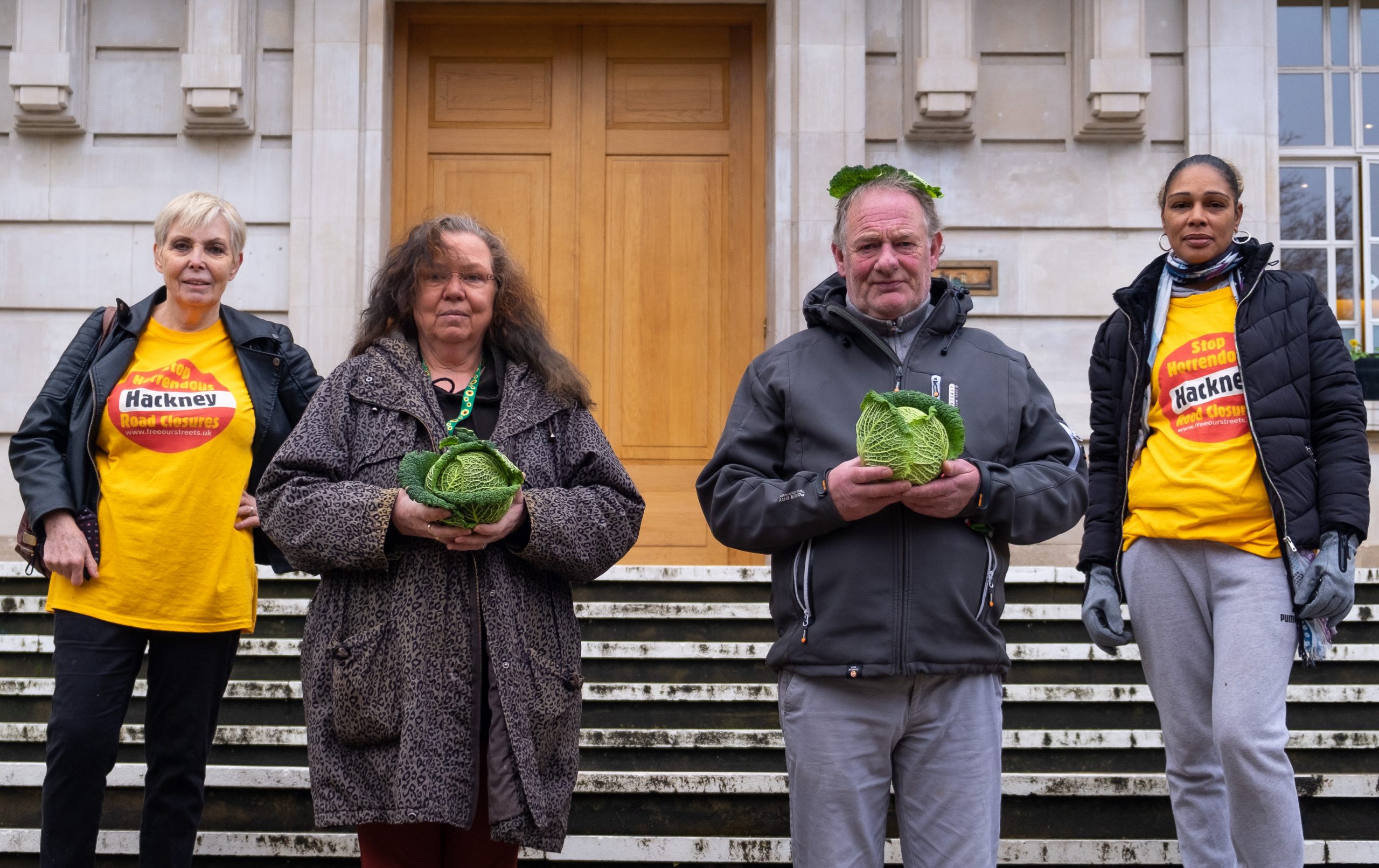 Cllr Burke recently lashed out at Londoners, he called ‘birthers’ (a derogatory political term imported from the US) and “degenerates” with a taste for neo-Nazi National Front graffiti, claiming “if it wasn’t for us immigrants (he is from Liverpool), “born n bred’ Londoners would still be eating cabbage with every meal and the shops would be closed on Sundays.”

“Now they are calling us cabbage-eating degenerates!” said ‘born n bred’ East Londoner Josie (pictured, left), “As if inflicting  roadblocks and gridlock, dividing our neighbourhoods wasn’t enough for them! Now they insult us. They seem to think if they can brand us as ignorant, thuggish racists, that’ll cancel out our voices and turn people against us.”

Petra Fryer (second left) who lives on the Kingsmead estate said “I am originally from Germany, so I’m definitely an immigrant and I don’t recognise the old Hackney he’s describing. I’ve lived here over thirty years, made Hackney my home, raised three children here and I really resent Cllr Burke’s remarks. Locals have always been warm and welcoming. There’s been immigrants coming here for centuries. He doesn’t know what he’s talking about. And these road closures are making life impossible for so many of us, which is why I joined the Horrendous Hackney Road Closures group and shall be on the motorcade on Saturday.”

“We decided to return the ‘compliment’ to deliver some Christmas cabbages to Cllr Burke and his boss Mayor Glanville, who has backed him all the way through this.” Said Robert Popkin from the Horrendous Hackney Road Closures group. “We have invited residents to bring along a cabbage along with a Christmas message for councilors. “We have nearly 8000 members of our group. That could be a whole lot of cabbages.

The citizens convoy will be making its way through Hackney’s most popular areas including Clapton Pond, Stoke Newington, Dalston, Shoreditch and Mare Street, home of Hackney Town Hall. En route they will be joined by people on foot, bicycle and mobility vehicles.

“More than a third of our members cycle, some don’t drive at all” says Leona (pictured right). “and we resent the council’s attempt to set one group of road users against one another. We also have many residents with mobility issues – including disabled and elderly residents – who have been seriously affected by the road closures. Amongst our membership we have carers, bus drivers, nurses and other members of the emergency services, so to brand us as thugs and degenerates is extremely insulting.”

A spokesperson for Horrendous Hackney Road Closures, which formed in October in response to the widest programme of road closures anywhere in the country, says the group is a cross-generation and cross community organisation that does not condone violence, criminal behaviour or intimidation.

The motorcade starts at 1pm and is expected to reach Hackney Town Hall around 3pm on Saturday.

Sign up for our newsletter, find out about our latest news and events.