Are we witnessing a re-awakening? 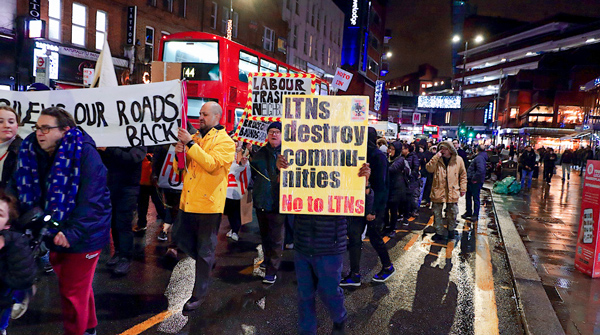 Last Tuesday (15 November), Islington Council attempted to hold its first public meeting in a 12-month-long consultation over its planned ‘liveable neighbourhood’ in its Barnsbury Ward. What caught officials by surprise was that, in addition to those who are for the scheme, many anti-LTN campaigners had also turned up.

The issue wasn’t just that the venue was too small that left many stranded outside in the cold, unable to attend. It was that the council had assumed few people would be interested in such a contentious (and divisive issue) over their local neighbourhood’s future plans. How wrong they were.

A few miles north in the London Borough of Haringey, the same thing happened again one week later. On a similar cold evening, last Monday anti-LTN protestors marched to their council offices to be told by councillors that the meeting was cancelled.

Why? Having seen the numbers of people who had turned up in protest about yet more LTN schemes, its organisers who were plainly unprepared for an actual debate, made their excuses and left apparently via the backdoor!

A surprising knock-on effect occurred back in Islington. A planned Finsbury ward partnership planning meeting in Islington to discuss another liveable neighbourhoods scheme (organised by Clerkenwell and Bunhill Labour councillors) was quickly postponed with just one day’s notice. An email sent to residents cited an earlier public meeting’s cancellation as the excuse.

What can we draw from the events of the past couple of weeks? There are three new aspects to this that could work in our favour.

First of all, unlike during Covid — where councils could rely upon emergency powers including traffic orders to run roughshod over public opinion — now, they are mandated to go through a much longer consultation 12-month process.

The corollary effect in a post-Covid era is that they are now considerably more exposed, and forced to be more transparent in how they consult with the public. More public meetings, more opportunities to hold them to account.

Second, until now we could have assumed that the public was largely demobilised, especially after this May’s local elections which appeared to consolidate many councils’ pro-LTN mandates.

Plainly, if these past few weeks’ events are anything to go by, both Islington and Haringey councils have been put on the back foot, having to quickly recalibrate how they go about their controversial LTN and liveable neighbourhood schemes.

The third point is that whatever councils try to push through will be made much harder by the double-whammy effects of the aftermath of Covid and the ensuing impact of the cost-of-living crisis.

Both are forcing the public and local businesses to make tough choices. Not least, about how to move about, whether for work, family commitments, or to support others in the wider community.

The reaction against London Mayor Sadiq Khan’s announcement to expand the Ulez zone to all of London is a case in point. Its impact is a direct attack on working people who are being further targeted and penalised with more charges.

There can be no doubt that every existing and planned LTN (and related scheme) will add further pressure on any chance of local economic, or wider community recovery. Instead, they will strengthen public anger and opposition to them, and remain divisive at best.

With more lengthy consultation processes to go through, councils will likely be faced with more angry scenes like we’ve seen in Haringey and Islington over the past few weeks. Are we witnessing a re-awakening of opposition to LTNs? It certainly feels like it if recent events are anything to go by.